Wolf’s run in with “home remedies”

Working in the veterinary profession, you see a wide variety of cases, and an even wider variety of obscure “home remedies” for each case. Unfortunately, more often than not, those “home remedies” are not helpful, and at times are even harmful to the animals. Here is the story of one such experience…

As regularly occurs in the Galapagos Islands, an owner leaves to the mainland for a period of time, leaving their pet in the care of someone else. In the case of Wolf, his owner left the Galapagos for four months, leaving him in the care of a friend. Wolf’s owner expected him to be well taken care of – how could anyone not look after a beautiful, kind dog like Wolf?

When the owner returned, however, she was horrified to see the condition her beloved pup was in. Poor Wolf had a severe skin infection and he was covered with parasites. In what was assumed to be a last minute attempt to present as though they were looking after the dog, the temporary carers had used one of these so-called “home remedies” and covered Wolf in floor cleaner. As opposed to treating the infection, Wolf had just been smothered in chemicals… When Wolf’s owner found the poor pup in such a condition she quickly rushed him to the Darwin Animal Doctors.

The Doctors noticed straight away that the dog smelled terrible, almost like gasoline, and wondered how anyone could think that this could be good for a dog… Dr Carmen gave Wolf a thorough wash straight away, making sure to remove all of the terrible chemicals on his skin. After his bath, the Doctors put Wolf on the proper antibiotics and deparasite treatment in order to clear up his skin problems. 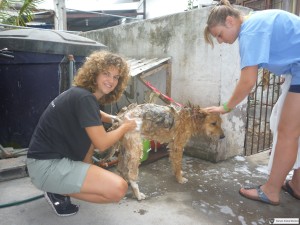 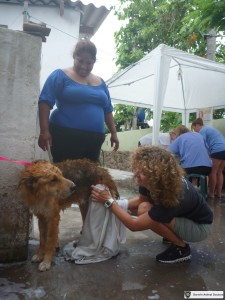 Wolf was clearly feeling better already, and made sure to give Carmen a big, grateful kiss before heading home. Wolf and his owner will return in two weeks for a checkup, but left the clinic smiling, feeling much better and knowing Wolf was well on his way to a full recovery. 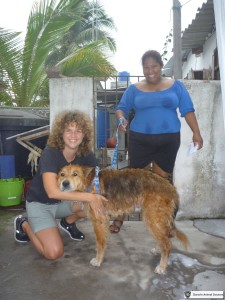 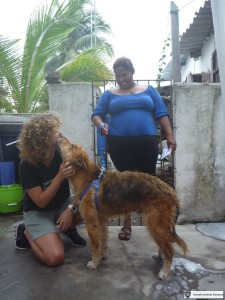 Please, take Wolf’s story as a warning, and always make sure to check any “home remedies” with your local veterinarian. Not all are helpful, and many can be harmful to your pets.