Vaca and her puppies

Dr Carmen was studying in the clinic one Saturday afternoon when a family holding their dog appeared in front of the gate. Vaca had given birth to two puppies around midnight the night before, and had continued to cry out as if she was trying to give birth, but had no more contractions. Concerned for the new mum, the family brought Vaca to the Darwin Animal Doctors clinic.

Dr Carmen gave Vaca an injection of oxytocin to see if it would be possible for her to give birth herself – but it was no enough. Dr Carmen realized that Vaca needed a C-Section to safely birth the last of the pups. A difficult surgery, all hands were needed, and so all the Doctors were called in from their places of rest and relaxation across the island.

The team arrived very quickly, and Dr Carmen informed each of them of the plan, and their individual roles. Dr Carmen and Jessica would perform the surgery, removing the uterus from the struggling Vaca and hand it over to Dr Daphne and Alisha, who would then remove the pups. Dr Daphne would check the pups and then hand them across to Elena, Jennifer and Sacha who would team up to care for the little new borns. The plan was set and the surgery room prepared. 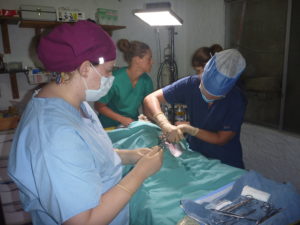 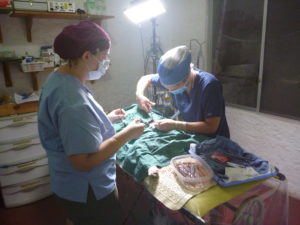 As Dr Carmen began the surgery, she quickly realized that this surgery was going to be even more complicated than expected. The uterus was huge, clearly containing far more puppies than expected. Dr Carmen had to make some quick decisions and change the plan. She and Jessica quickly removed the pups from the uterus and handed them over to the rest of the team to check on and take care of each pup. Dr Daphne and the team were handed pup by pup to care for until they had twelve little new borns in front of them. Miraculously, the team were able to save nine of the beautiful pups. 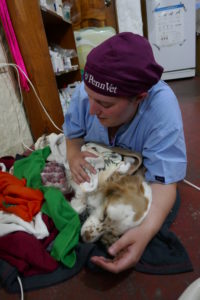 An incredible surgery, the team had spent all day in the clinic by the time it was completed. Vaca was tired, but healthy and would soon return home with her clan of little pups. 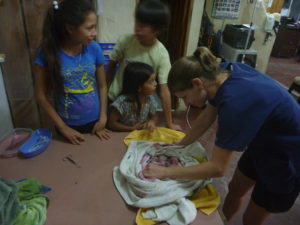 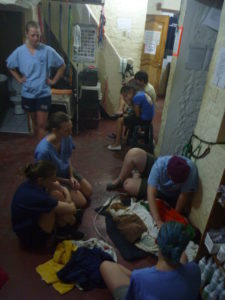 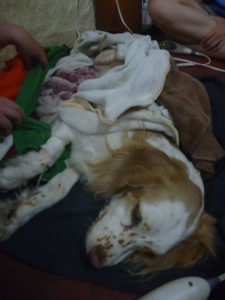