This gorgeous puppy is only four months old, and has already had a hard run of life. At such a young age, little Rainy had bladder stones – something normally only older adult dogs get. The Doctor had to conduct a surgery on the little pup in order to remove the stones and investigate the cause. During the surgery, they discovered that Rainy’s bladder was in very bad condition. Unable to do much to the bladder, the Doctor removed the stones and reconstructed the urethra, basically forming another hole from which the pup could pee. The surgery was a complicated one, and the results would be uncertain for the coming days. For that reason, it was necessary for Rainy to stay in the clinic for a while to remain under observation.

For the next week this little bundle of joy ran around the clinic, as if he did not care whatsoever about the fact that he was previously very ill. His tale was always wagging as the playful pup would attack passing pant legs, lick at people’s ankles and sniff and investigate every corner of the clinic. Rainy made everyone smile with his happy, care-free nature, and playful attitude. 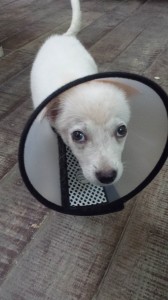 At the end of the week, one of the clinic workers came to the Doctors and reported that Rainy had started to have some red in his urine. Everyone was worried for the poor little pup. The Doctors sedated Rainy and passed a catheter to ensure that there were no new stones and to help stop the risk of infection. Thankfully, the catheter went in successfully, and it seemed there were no complications. 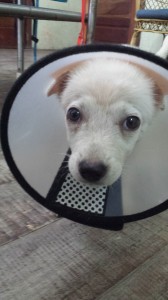 A few days later the Doctors were able to remove the catheter and Rainy was able to go home. This little pup narrowly escaped death – with a smile on his face, and somehow filled with happy enthusiasm the entire time. While not totally in the clear, Rainy is improving rapidly and will continue returning to the clinic for check ups.