One Sunday afternoon, our Galapagos chief surgeon, Dr. Carmen, received news of a little female puppy roaming the streets of Bellavista – a town located in the highlands of Santa Cruz. The images attached to the message showed that this puppy had a very bad eye. Dr. Carmen knew that the eye would have to be removed as soon as possible. So, she sent a message back, asking for people to catch the puppy and bring her into the clinic with haste.

The next day, a woman arrived at the clinic with this same little puppy in her arms. The woman had taken pity on the young dog and decided to take her in, as she was in need of serious veterinary attention. The Doctors inspected her eye and discovered not only was the eye infected, but she was completely blind in that one eye. Unfortunately, her eye could not be removed immediately, as the Doctors hoped, since the young pup had developed severe respiratory problems. She sniffled constantly and had a lot of trouble breathing. The puppy could not undergo surgery with this condition, so the Doctors placed her on antibiotics and painkillers until she was well enough to come back for the procedure in three days’ time. 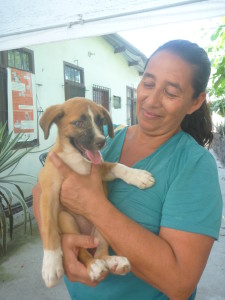 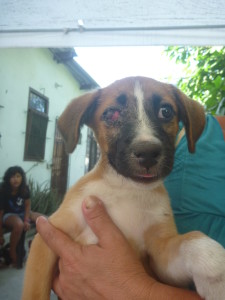 Before leaving the clinic, the new owner of the puppy expressed that she had not thought of name for the little pup yet and asked the team to help her come up with something creative.

“I thought, who has one eye?” Dr. Carmen recalled, “Pirates! So I had the honor to call her Pirata.”

Three days later, Pirata came back to the clinic for her scheduled surgery. Her respiratory symptoms were gone and Dr. Babette was able to perform the procedure. Everything ran smoothly and Pirata woke up feeling great! It was evident she was happy to be rid of her painful eye. As her excitement rose, the team placed an e-collar on Pirata to ensure the wound was protected from impulsive paws. However, Pirata was perplexed as to why she had a great big plastic cone around her neck! 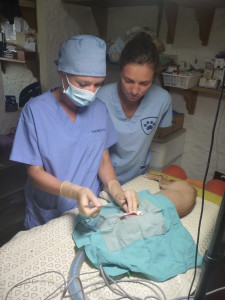 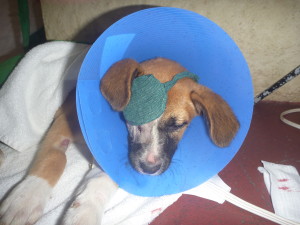 “For hours, Pirata thought she was only able to walk backwards, making everybody laugh in the clinic!” Dr. Carmen exclaimed.

By the time Pirata left to go home, she had worked out how to walk forwards in her temporary accessory. The team was ecstatic to see the sweet little pup find a new, loving family. Pirata is now one less dog living on the streets. 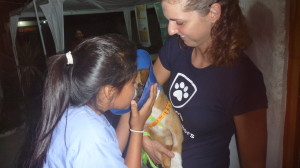