Malandrin: A dog in need of fluids

One afternoon in the Galapagos clinic, a young dog named Malandrin was carried in by his owner, barely responsive and lethargically hanging in his owner’s arms.

The Doctors immediately came to the aid of the four month old pup. After a quick examination and a few questions from the owner, they determined that Malandrin had been vomiting for three straight days and had terrible diarrhea. Coupled with the extreme heat of the Galapagos Islands, it was clear that Maladrin was severely dehydrated. As for the cause of the symptoms, the Doctors suspected that Maladrin was infected with Parvo virus.

Parvo is a life threatening virus which typically affects a dog’s digestive tract causing loss of appetite and severe vomiting and diarrhea. In these conditions, a dog can lose so much nutrition and water through vomiting and diarrhea that even two days without treatment can result in the death of the dog.

Maladrin was clearly badly affected and would have to follow an intensive treatment plan; He would come into the clinic every morning and every evening for intravenous (IV) fluids, as well as antibiotics, anti-nausea medication, and glucoses. The treatment plan is labour intensive, as a veterinarian must be available in the clinic every 12 hours to spend the time required to slowly deliver enough fluids to the patient. 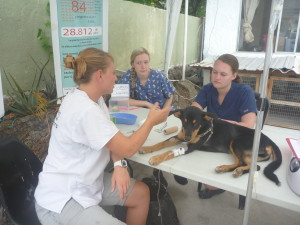 Malandrin was a very thankful patient, as if he knew exactly what was being done for him.  Twice a day, he gently lay on the table and surrendered himself to the Doctors’ care – and within a few days the progress was already becoming clear. Malandrin changed from a lethargic and dehydrated dog into a playful and healthy puppy. The improvement was fantastic, and the Doctors were able to change Maladrin over to oral antibiotics once he was well on his way to recovery. 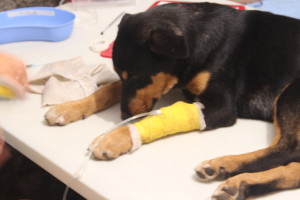 In countries in which regular and routine veterinary care is standard, a dog would be vaccinated at six, nine, and twelve weeks after birth and yearly for Parvo, Distemper, and Leptospirosis viruses.  Unfortunately, vaccinations are prohibited in Galapagos because the vaccine itself is a disease and Galapagos authorities do not permit bringing any diseases to the island. As a result, in the Galapagos, dog and cat owners and the veterinarians that attend them must be especially attentive to diarrhea and changes in the animal’s drinking and food consumption.  Early detection and treatment can reduce the severity of the disease and significantly improve the animal’s chance of survival.

Lucky for Maladrin, and many other dogs in his situation, the Darwin Animal Doctors are there for when this terrible virus strikes.