This is the story of a cat whose life we saved in the Galapagos. In an effort to spread the message of proper animal care, Morgan and I went walking door to door offering free veterinary service to anyone we came across. A group of men, constructing chairs out of logs and carving intricate turtle statues out of tree trunks, led us to a cat in their backyard they said was dying. We followed a dirt path around the corner to a small fenced in area of the yard. Lying in the dirt, covered in dirt and ants, was an orange neutered male cat in obvious need of emergency care. 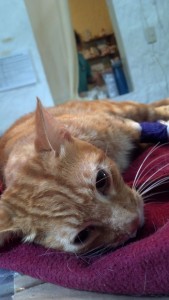 Morgan explained the seriousness of the situation to the man, and we hurried back to the D.A.D center to grab a cat carrier. We returned just in time to see the cat hobble over to a hole in the fence and disappear into a neighbor’s yard. Thankfully, the owner quickly wrangled the little guy and we were on our way back to the clinic to save a life. “I’ll bet he’s blocked,” Morgan speculated on the walk back.

Sure enough, when we examined him back at the clinic and palpated his abdomen, the most obvious feature was a rock hard bladder. A quick shot of sedative settled the very painful gato down enough for us to relieve some pressure by removing a small amount of urine via hypodermic needle. A quick look at the urine sample under the microscope showed what caused the obstruction: small amounts of struvite crystals and a lot of white blood cells. After a little more anesthetic, he was ready for us to drain the rest of his bladder and give him some comfort. His eyes very clearly showed the horrible discomfort he was in, as he was prepared for the catheter to be placed, and for the bladder to be flushed and drained. I really felt for the poor animal. 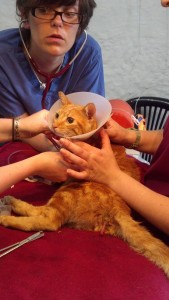 The urine we drained was bloody to say the least. After several rounds of flushing and draining his bladder, the relief was apparent as he looked around to his hind end to see what was making him feel better. When the owner and his daughter came by to pick their cat up, Morgan explained that his cat was possibly only hours away from death, now resting comfortably in the clinic. The impact hit home noticeably on the family as the young daughter shed a few tears. The father guaranteed that he would rush the cat right back if he ever looked ill again.

One of the goals of Darwin animal doctors is to change the opinion of the local population that cats and dogs are merely invasive species. They are actually family members who deserve to eat proper food, own a collar and get spayed/neutered. Change is clearly occurring in the Galapagos, a place so famous for its evolution.