Over the last month, I have been lucky enough to be working at Darwin Animal Doctors on Santa Cruz Island in the Galapagos.  As a clinic, we have seen a huge variety of cases ranging from parasitic infections to road traffic accidents to poisonings and puppies being born.   It has had its high and low points, as this job always does, but I have been amazed by the love and kindness shown by the community to the animals and to us here at DAD.

My favourite animal tale, so far, is that of Huesos (“Bones”), also known as Rex.  He was found wandering the streets emaciated and disorientated, hence the name Huesos.  Normally, we do not take in animals from the street but this lovely Doberman was so close to death we simply couldn’t leave him.  We took him into the clinic and into our hearts whilst he slowly recuperated.  As we had been lucky enough to have a blood analyser donated to the clinic, we tested his blood and found that his internal organs were all really healthy and that we had no other concerns for him apart from the fact that he was really weak, especially in his back legs.  He spent a very happy couple of weeks resting and eating with us and slowly started to regain his strength and confidence.  We were all so excited the first day we heard him bark as he began to feel at home with us, such a small bark from such a big dog. 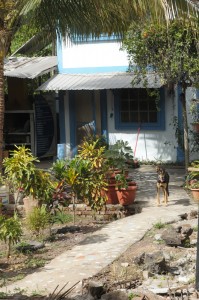 After a couple of weeks with us we started to take him for short walks to help strengthen him up again, after a few days of short walks he disappeared from the clinic one evening.  We were all distraught and spent much of that night and the following morning searching for him around the streets of Puerto Ayora.  Somehow we knew he was safe as we would have found him if he had been just on the streets.   The following day a lady came to the clinic saying that her dog had been missing for over a month and had returned last night, she was very worried as he was so thin and wanted us to check him over.  Sure enough, it was Huesos, who had recognised where he was from going on his walks and had taken himself home.  His owners were overjoyed to see him as he had been missing for so long they thought that he had died.  We were also overjoyed to know that he had such a loving home and we now knew his real name was Rex.  Rex is now doing really well at home, and although it will take time for him to fully recuperate, he is getting stronger day by day. 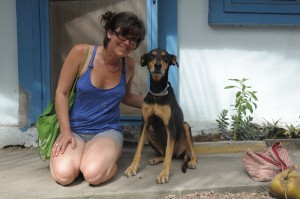