As well as working with the dogs and animals in town, one important mission of the Travelling Animal Doctors (Darwin Animal Doctors) team did was to go out to small, isolated and inaccessible towns to make contact with the people and animals for the first time since the earthquake. The team were brought in by military trucks as they were the only vehicles believed to be able to pass the roads and reach the towns to bring supplies. 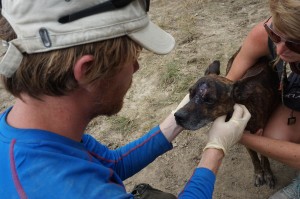 Unfortunately this was not quite the case, with the trucks reaching a standstill point where they could not pass the roads each time. Unwavered, the team continued on foot alongside other volunteers to bring news to the town that a supply truck of human and animal supplies was near and to bring the veterinary aid to them. In one town, the team found a poor undernourished dog that had seemingly been attacked, most likely by another dog. After coaxing the dog out from his hiding place, our vet Jochem was able to treat the wound on the dogs face. 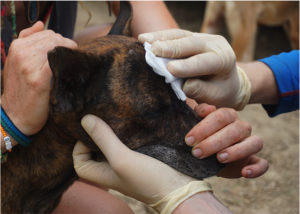 It seemed he arrived just in time as there were the first few maggots already living in the wound. The poor pup understood quickly what was going on and cooperated perfectly with the team as Jochem cleaned and treated the wound. 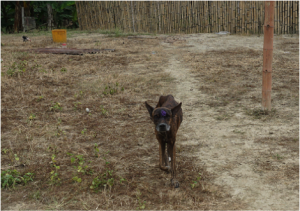 As the few members of the town looked on and witnessed love and care for animals demonstrated by Jochem’s treatment of the dog, it was hard not to feel that they were impacted somewhat too. 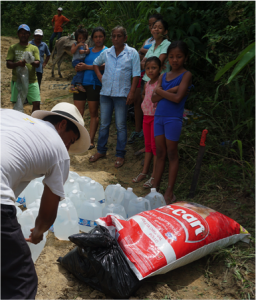