Bonny was brought into the Galapagos clinic by a young, high-school aged girl one evening, just as the clinic had finished closing up. Bonny had been acting normally all day, but over the last hour, the little pup’s condition declined rapidly. As Bonny got increasingly worse, the concerned girl decided to rush the pup to the Darwin Animal Doctors clinic.

The Doctors could see straight away that Bonny’s condition was critical. The little pup would not move at all. Her extremities were all cold, her internal temperature low, she had lock jaw and was hypersalivating. On top of all of this, the little pup would occasionally let out a heart-breaking squeal.

The Doctors believed that Bonny most likely had ingested some type of poison, or had incurred a spinal injury. The Doctors questioned the young girl to determine what could have happened to Bonny, but the girl believed that there was nothing in the house or in the patio area where Bonny had been that could have been a toxin, nor had she fallen or been injured. (She later found a bag of garbage in the area which could have contained something poisonous that Bonny could have eaten).

With no information to go on, and Bonny in a critical state, the Doctors began to try everything they could to save her life. They tried every usual medication to save Bonny, but nothing seemed to have any effect. As the team became increasingly concerned, they were left with one last possible option – a small amount of a certain medication, that in the correct exact dose, can be used as an effective contra-poison. The team had to be very precise with the dosages as too little would have no effect, and too much would effectively euthanize the little pup. The Doctors would administer the medication in very small doses over a few sessions.

Bonny was given the first dose the morning after she was brought in, and another that afternoon. The concerned Doctors closely monitored Bonny’s condition throughout the day and gave her a final dosage of the medication that evening. While Bonny’s screaming had stopped, the Doctors could not tell if her condition would improve. As the somber team went to bed that evening, they hoped the medication would have its desired effect overnight.

The next morning, as the team arrived early to check on Bonny, they were met with a miracle. Bonny was up and walking around the clinic, and even wanted to eat. Her condition had improved immensely – she seemed an entirely different dog to the previous days. The only reminder of her near-death experience was that Bonny now seemed to have somewhat reduced vision, bumping into a few things in the clinic every so often.

The team called the young girl to let her know the news. The Doctors, the young girl, and Bonny were all ecstatic about her miraculous recover. The lucky pup had escaped near death, thanks to the hard work and ingenuity of the Darwin Animal Doctors team. 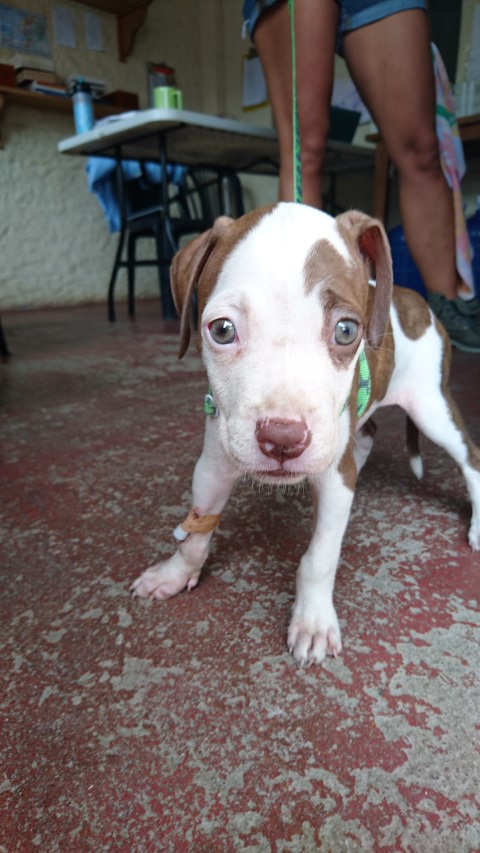 Save more animals in need – just like Bonny- by donating today!