Bolon is a cat well-known at the clinic for his bladder problems. He has a condition known as Crystalluria, where crystals form in his urine. As the crystals group together, they form a plug and prevent Bolon from peeing.

Bolon had come into the clinic for the treatment of his condition a few times before, however this particular visit required absolute urgency and immediate action. Bolon had a very full and almost exploding bladder (which can actually occur), so the Doctors rushed Bolon into the operating room.

Bolon was sedated and had a urinary catheter inserted to remove the plug and relieve his bladder – just in time. The Doctors flushed his bladder and fixed the catheter so it would stay in place for the next 24 hours. Bolon was placed on an IV line to ensure he was well-hydrated and to help dilute any of the crystals still remaining. He stayed in the clinic overnight to remain under close observation.

The next day, Bolon seemed to be feeling better. He spent the day in the clinic and was back to his normal self with his normal bodily functions. The Doctors removed his urinary catheter and IV line and Bolon was ready to go home. The Doctors scheduled him to come back the next day for a follow up.

Bolon came back into the clinic the following day, but he was not doing very well. His bladder was once again enlarged, which caused him extreme pain. The Doctors realized that Bolon’s condition had reached the point to where the problem was becoming unfixable for the long-term. 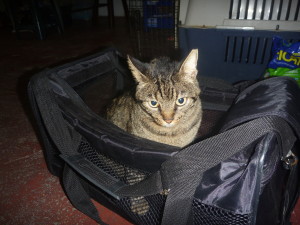 “So I suggested a more radical, but permanent solution,” reported Dr. Carmen, “a feline perineal ureterostomy.”

To put it simply, the Doctors surgically altered the opening of Bolon’s urethra so that it is large enough to pass the crystals in his urine. The owner agreed to this life-saving surgery, as it was the best available solution to Bolon’s reoccurring problem.* 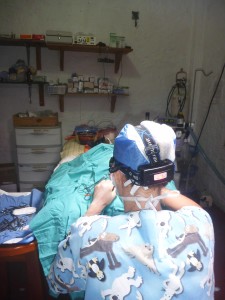 “I performed the surgery and it went well,” Dr. Carmen stated, “the next day Bolon went home with an e-collar around his neck. He will return every day for antibiotic injections and check-ups.” 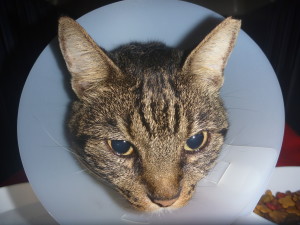 When Bolon’s family came to pick him up, Dr. Carmen was greeted by a lovely surprise. The young girl in the family had made Dr. Carmen a painting to thank her for saving Bolon’s life. 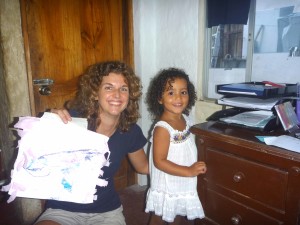 *Usually, cats are put on a special diet to help stop this condition from occurring. Unfortunately, this particular type of cat food is not available in the Galapagos