Afrika is an 8 month old Pitbull who had severely irritated skin with a significant amount of hair loss over her face and much of her body. Her owners were worried about the poor pup and took her to a vet on the island who applied a treatment to her skin. Unfortunately, this treatment gave Afrika an allergic reaction and her condition worsened, with the skin on her face and body swelling and becoming very red. Afrika was scratching and chewing at the irritation and itchiness caused by the skin issue, which only worsened her condition further. The family was unsure what to do for their beloved dog and sought help from another vet. This second vet gave Afrika an injection just below the skin and told the family that they could only wait.

But Afrika did not improve.

The poor pup continued to scratch away, extremely irritated by her red inflamed skin. Afrika then developed a terrible infection in her skin and skin lesions and she became quite ill. Unfortunately for Afrika, the second vet saw no options for her improvement and advised the family to euthanize her. 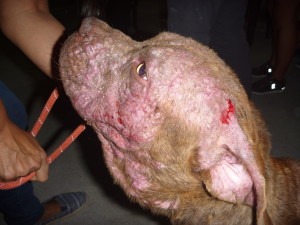 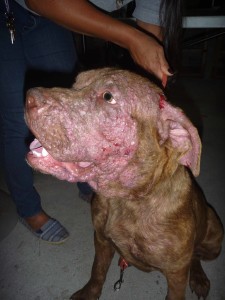 While every else seemed to give up, the family would not. They took Afrika to the Darwin Animal Doctors, searching for any other possible options for treatment. The Doctors quickly saw how dire the condition of Afrika was and tested her skin to be sure of any diagnosis. The Doctors discovered Demodex, in all stages of life – the poor pup was terribly infected by it! Demodex is an infestation of a dog’s skin with tiny mites which live in the hair follicle and oil glands of the skin. Almost all dogs have some number of the mites, but most dogs are healthy enough to be able to “fight” the mites and keep their levels down. For some dogs who are weaker, or have environmental or nutritional stresses impact their health, however, the mites become too overpowering and start to cause a lot of damage; like skin lesions, hair loss, and excessive itchiness.

With their diagnosis, the Doctors gave Afrika the appropriate treatment. They also gave her an E-collar (a plastic cone around her neck) to stop her itching and damaging herself any further while her skin was improving. 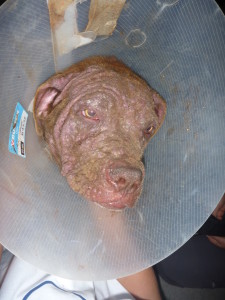 One week later, Afrika came back to the clinic for a recheck. She already looked significantly better and was much happier, evidently not nearly as irritated by her skin. Afrika will come back for regular checkups, but her rapid improvement says that she will heal just fine and will not have to be put down! What a relief for Afrika and her family! And another success for the Darwin Animal Doctors! 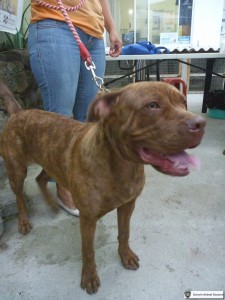 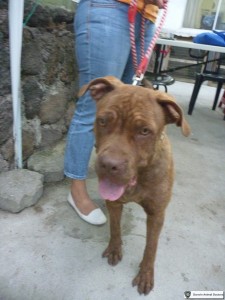