“Thank you” just doesn’t cut it…

As well as a full stock of supplies, we can also upgrade the clinic, especially the surgery room, in order to be better equipped to treat domestic animals and the increasing number of wildlife cases coming through the door. The impact that such generosity and support from the Celebrity Xpedition Galapagos Fund will manifest in safer surgeries, better anaesthetics, better equipment for the treatment of wildlife and a stock of high quality supplies. Our Darwin Animal Doctors vets will be able to treat more animals and at a higher standard than ever before.

Our Ecuadorian suppliers Vetflexx and AllPets, also long term supporters of the Darwin Animal Doctors, helped us get what we needed. Omar, Dr Sotomayor and Dr Tania along with their amazing team from AllPets coordinated the orders and purchases from their base in the capital city, Quito. AllPets were also an important partner supplying our earthquake relief team during the 2016 disaster on the coast of Ecuador.

As the team in Quito organised the supplies, NOVA Galapagos, headed by Rene Heyer, worked alongside Carmen in organising the logistics of moving such a large order to Galapagos and making sure everything complied with the strict restrictions on shipments in and out of the Islands. Eventually it was decided to send Carmen to Quito to personally escort the supplies back. The biggest concern was that this would leave a clinic full of patients with no qualified veterinarian in attendance.

As if they had somehow heard a telepathic call for help, two veterinarians, Dr Paul and Dr Babette contacted the clinic mentioning that they were currently travelling in South America and inquired if Darwin Animal Doctors needed any veterinary volunteers. With cases streaming in the front door, Carmen was very happy to have such an offer, and Drs Paul and Babette were confirmed to volunteer and their paperwork was underway. And then, Carmen and Rene had an idea. They contacted Paul and Babette and asked if they would mind going first to AllPets in Quito to pick up the supplies and bring them over to the clinic. Thankfully they said that that would be no problem, and the issue of how to transport the supplies to the Islands was solved.

After that, everything set in like clockwork. Paul and Babette purchased two extra suitcases and dropped them off with Dr Tania and her team from AllPets . The next day, the two picked the cases up, full of supplies, to bring with them to the clinic in Galapagos. As not everything fit this time, Dr Tania and the team at AllPets will fill more suitcases for the next volunteers who have already agreed to make a stop in Quito to coordinate the movement of the next set of supplies.

Darwin Animal Doctors are constantly aiming to provide the highest level of veterinary care possible, in all areas of the world. The generosity of organisations such as the Celebrity Xpedition Galapagos Fund and the kindness of individuals such as those from VetFlexx or veterinarians such as Paul and Babette, allow us to reach this goal. Thanks to this coordination of support, our clinic is now better than it has ever been. 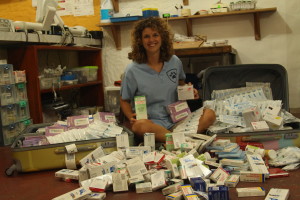 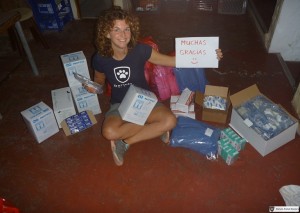