Principe and his motorbike incident

Late one afternoon in the Galapagos clinic, two girls came running in holding a small Boxer puppy. The Doctors noticed straight away that the two month old pup had blood covering his nose and front paws, and asked what had happened. The worried girls hurriedly told the Doctors that Principe had fallen from their motorbike, landing face first onto the street. The Doctors then turned their attention to Principe… 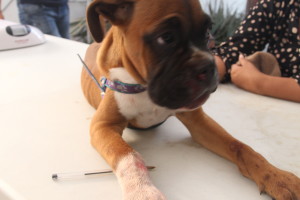 Contrast to the girls’ concern, the little pup acted as though nothing was wrong – he playfully barked, wagged his tail and jumped around as the Doctors examined him. Full of puppy energy, the little guy was just happy to be getting the attention!

The Doctors checked Principe very carefully, finding no other injuries and nothing that would lead them to be concerned for internal injuries. The Doctors then cleaned up his paws and face, finding no injury to the paws, but quite a laceration on his nose. Thankfully, the cut was quite superficial, despite its size, and seemed the only cut sustained from the fall. Principe also had a bruise forming under his chin, but had no evidence of broken bones. 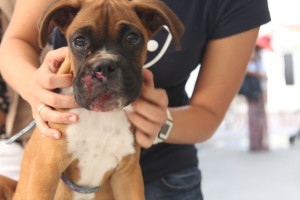 The Doctors gave Principe some painkillers to help with the pain, and some antibiotics to ward off infection. Luckily, that was all that the little pup needed after his motorbike accident. The Doctors were able to use the example to explain to the girls that they need to be careful with a dog on a motorbike – the same way they are careful themselves, and also to congratulate them for taking the initiative to come straight to the clinic.

Principe went home in the arms of the girls, with the three a little more aware of the dangers of motorbikes!