One afternoon, a young boy was sitting in his house when he heard a car hit the brakes on the street just outside, screeching to a stop. Unsure what had happened, he rushed outside to see what the commotion was. As the boy looked, he saw a poor little pup lying in the middle of the road, clearly injured.

The boy thought quickly and scooped the pup up, running to the Darwin Animal Doctors clinic with her in his arms. As he arrived, the Doctors quickly took the dog inside and examined her closely. Luckily, the boy brought the little pup to the clinic so quickly, that she was not yet in shock and was stable. However, the car accident had not been without its damage. She was left with a broken hind leg; a broken tibia and a fractured fibia. The end of her tail was also broken in the collision. It was clearly a very painful event for the poor pup.

The Doctors believed that the fracture would be able to heal, given the right amount of rest and time to repair. So the team sedated the pup and built her a special cast so as to immobilize the fracture and give it the necessary time to heal. Unfortunately there was not much the Doctors could do for the pup’s tail, and she may never regain full use of it. She was given strong pain killers in order to make her a little more comfortable and she was ready to go home. The team then looked to the young boy and asked him if he would be able to care for the little dog. 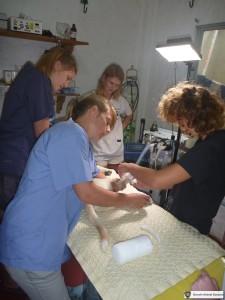 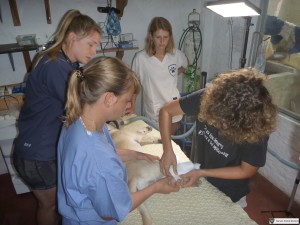 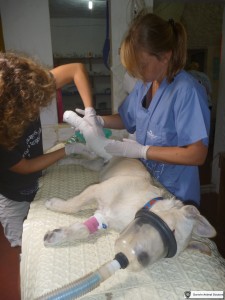 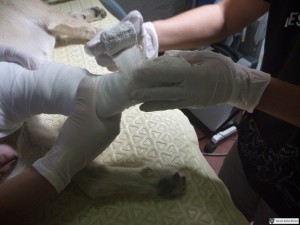 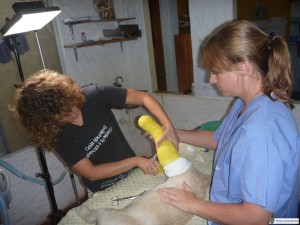 The young boy’s answer made the Doctors smile; He named the lucky pup Princessa, and promised to take good care of her. The boy dutifully took Princessa home, to return for her check up in two weeks.

The Darwin Animal Doctors are well known for reminding people to not let their dogs roam the streets – including walking their dogs on a lead and keeping them in a fenced yard when at home. We might start to sound like broken records, but remember – we don’t do it without good reason. Please be careful, and don’t let your dog wander around streets.