One of the first animals visited by the team was Cachiva, a particularly special dog to the Travelling Animal Doctors (Darwin Animal Doctors) team. Cachiva had a tough start to her life living on the streets of Canoa, until she was found by one of the members of the team in September 2015, during our high volume campaign in that Ecuadorian coastal city, before the earthquake.

When first found in September, she was near death, with little to no hair, covered in mange and open wounds, badly malnourished and hardly able to breathe due to a piece of wire wrapped around her neck. Taking pity on the poor pup, a team member took her in and began her treatment and recuperation. Cachiva made a strong recovery and became an icon to the town, a symbol of how love and proper care can completely change the life of a dog. Cachiva was the first dog spayed by the Travelling Animal Doctors team in their October campaign and after a speedy recovery from the surgery, gave confidence to many other community members to bring their dogs forward to be sterilized as well. Cachiva was later adopted by a lovely couple and remained a living icon in the beachside town. 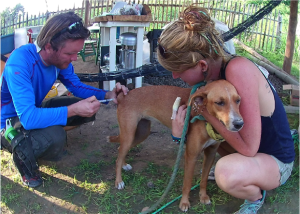 Hence, upon arrival, the team heard quickly news of the pup, that she had been found after fleeing from the earthquake and was more or less well, apart from a growing lump on her back, right above her right hind leg. The team quickly sought out Cachiva and her family in their temporary housing setup. With no vet care in Canoa and very few options in the surrounding areas, Cachiva’s owners had been trying to save the money to get Cachiva to a vet to have a look at the tumour. They had finally been able to do so and had booked an appointment with a vet in a town nearby, when the earthquake struck, destroying their house, and everything in it. 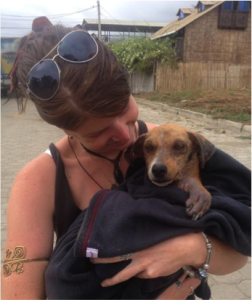 In hearing this story, our vet Jochem instantly offered up his services, conducting a full check up of the dog and then working all morning to set up an emergency surgery room and prepare Cachiva (and her owners) for the surgery. In an abandoned school classroom, under zip-tied flashlights, Jochem spent almost two hours carefully removing the tumour. Once satisfied with his work, Jochem took extra care using special methods to carefully close the wound, due to the excess dust and bacteria in the area after the disaster. The operation was a success. The happy little pup was returned to her owners who were relieved to see her looking so well, and grateful to receive good news in such a tough time. Cachiva, being right back to her bright spirited self, can now continue her duty of cheering up and giving hope to the people of Canoa. 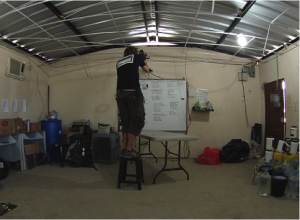